Well, I've seriously neglected the blog recently. There have been a lot of non-artsy things happening. On the other hand, I have been doing lots of thinking about how I'm really going to accomplish these mixed media pieces that I need to do for the grant show. Up until now, I've been thinking of them as drawings, but I think they will end up more as assemblages. Time will tell.

Here's a bit of what I got done today... 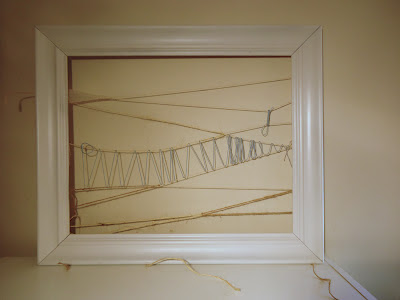 There are different knots at each of the crossing points. I learned I am not good a tying knots. This took for.ev.er. So far: cotton, sisal, and jute twine, ink on mylar, cotton thread. The blue thread is filler for now; it will not be staying, at least not in its current wrapping. There will be more mylar, and, I think, perhaps some trace. I also have some neck ties which may work their way into this piece, tentatively called the ties that bind...

update: I am tweeting updates of this piece @DawnDraws hashtagged as #thetiesthatbind.
Posted by Unknown at 2:37 PM No comments:

Email ThisBlogThis!Share to TwitterShare to FacebookShare to Pinterest
Labels: grant, IAC, ink, mylar, what have I done?, wip, work in progress

If you've been following along, I've been teaching a 6 week mural class in Harvey. This was the plan, an 8"x20" painting: 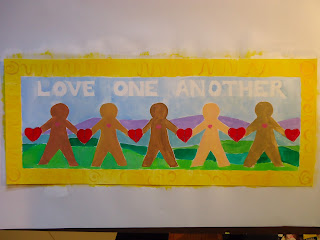 We ended up with an 8'x24' mural on plywood which was to be installed outside on Broadway. The first week the kids primed the boards, and began cartooning which they finished up 2nd week. Then onto the painting. 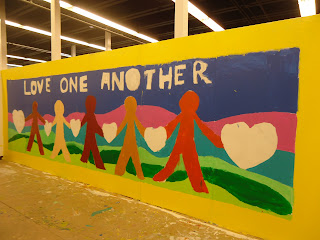 We also planned, if time permitted, to add mosaics to the hearts. 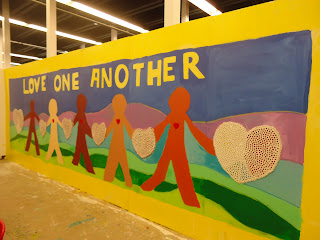 Here it is all done! ready for the installation outside! It was decided to hang the mural up high so that it would be able to be seen over any parked cars and to hopefully limit any vandalism. We had planned to have a wrap around secondary mural on the courtyard side of the building, but hanging the kids' mural high changed that plan. This secondary mural would feature the landscape background escaping out of the "frame" and dissolving toward the inside corner.

I agreed on Monday to paint the mural. I would start Wednesday morning. It was to be completed for Thursday's student program when the kids' mural would be unveiled. It was going to be a long two days. Here's the original space the kids primed. 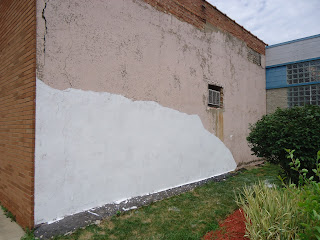 And so I began on Wednesday... 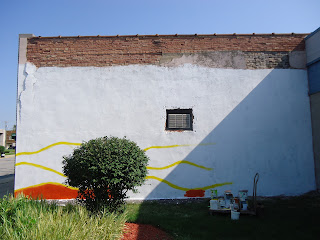 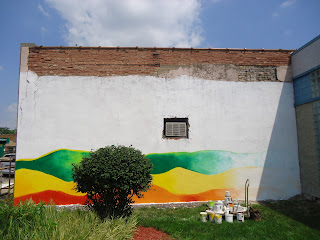 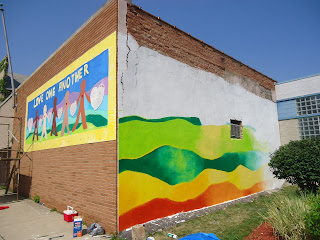 And Thursday...which included scaffolding. Ideally, I would have painted this top down, but that wasn't an option. 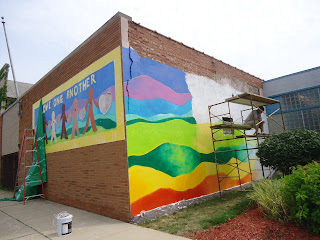 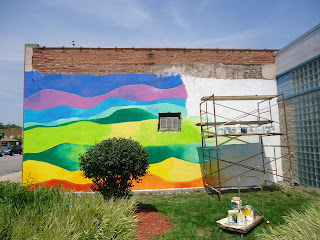 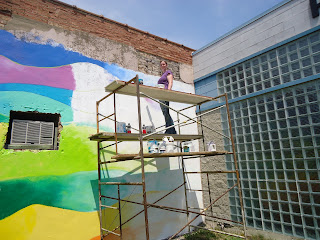 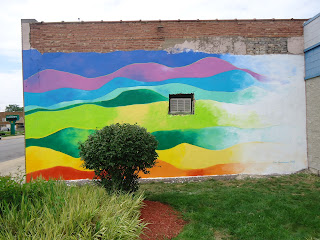 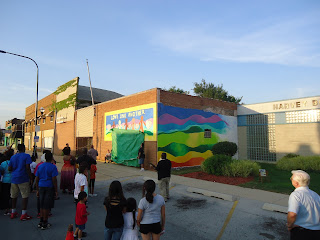 The murals are at Restoration Ministries Gallery of the Arts at 15331 Broadway in Harvey, Illinois. A big thanks to them for this opportunity. They have a great program in place for the community and are working hard to make Harvey a better place.

Posted by Unknown at 2:33 PM No comments: