N is for a New Plan, or why I am not a graphic designer

nwicreative.com had a type project last week: create a capital letter N. I thought this sounded like fun, which, frankly,  surprised me a little. I think if I hadn't just done the you are beautiful I, I probably wouldn't have given it a second thought.

Type is the reason I am not a graphic designer. Seriously. My first semester at Pratt, there was some sort of organized talk-to-an-upperclassman-in-your-major event. I remember sitting on the floor in the elevator lobby on one of the floors in the dorm and listening to some girl tell us that she doesn't even use press type, because her type skills are that good. And none of her friends use press type either because their skills are that good. And how awesome is that because everyone knows an entry level position in a design firm is going to mean a job doing type.

That spring I registered for CommD classes.

That summer I decided I was crazy to register for CommD classes.

Because I didn't want a job doing type. I didn't even want to take a type class. I just wanted to paint. I changed my classes over to Fine Arts. Ironically, the following semester I changed my major from painting to printmaking and started making etchings made entirely of writing.These etchings are the inspiration for the look of the ink drawings I do now. 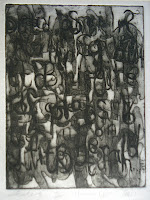 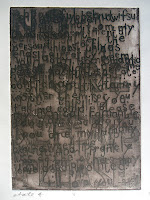 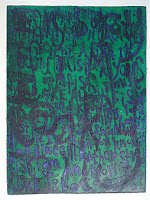 Back to the letter N... I thought about doing two, one each ink and painting. Then, I sort of ran out of time. Surprising, right? No? hmm.. Actually I thought they were due a day later than they were. oops. I had made all sorts of super swirly edged N's which sort of ended up as a sleek ribbonlike N. I masked it and inked it. But I didn't have lots of time so I inked it in away that I thought would mimic crosshatching by writing in different directions. It didn't work. It was hideous. And I mixed a brown ink which I can only say did not work. This is why I work in daylight. Artificial light sucks. So, I decided to paint over it. Even though it was dark. In artificial light. I think I saved it. You can still see the brown ink in the outline. 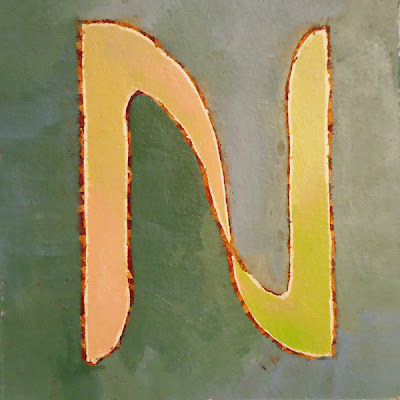 One of the cool things that came out of this was some inspiration for an old project. After I did the History Repeats drawings I did the seven deadly sins and the corresponding virtues. I did sample after sample after sample to get the inks just right. But after I was done with the drawings, they felt kind of generic. They were missing something. They just weren't personal enough somehow. I think I tried to make them too much about the sin/virtue rather than using that as a beginning point. So now I have a New Plan to paint over them. I think I will start with some gouache. I used acrylic on the N, but I want to lay into these slowly so I can keep some of the text. Look for future posts about how these images will change. 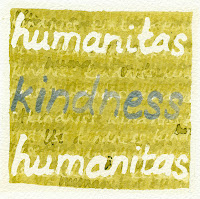 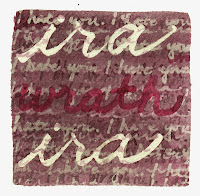 Posted by Unknown at 5:03 PM No comments:

Email ThisBlogThis!Share to TwitterShare to FacebookShare to Pinterest
Labels: #Nisfor NWI, acrylic, crazy, etchings, History Repeats, ink, what have I done?, work in progress, YOU ARE BEAUTIFUL 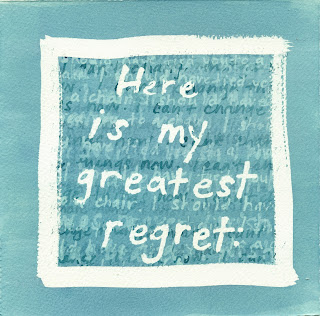 Today is delivery day for History Repeats and the sun is shining. Yay! for good weather on delivery day! 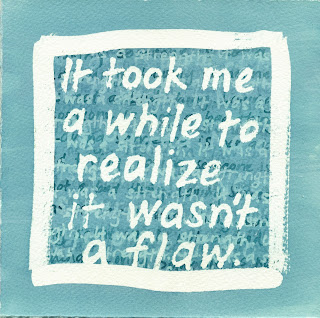 I made this series in January 2011. You can see work in progress pics on my facebook page. There are 16 drawings in this series, most of which were shown in the Decompression show with Megan Green and Lee Ligocki. There are a few that haven't been shown before, just due to space restrictions in that show, including the two featured here.

History Repeats opens Friday May 18 at South Shore Arts Substation No. 9 and there will be an artist reception Saturday May 19 from 11-3, in conjunction with the Downtown Hammond Art Tour.

reminder: one week left to sign up for the good karma artwork giveaway!

Posted by Unknown at 6:43 AM No comments:

Sometime in the last week, I hit 150 "likes" on my facebook page. That is all kinds of awesome and I am grateful for the support. Art related things are going really well for me right now and there are good things in store all summer. Seems like a good time to put some good karma out into the world.

I wanted to have a giveaway to commemorate this cool facebook milestone, but I'd have to hire a lawyer to be sure I met all of the terms of agreement red tape and thaought that sounded like to much trouble/money/work. Seriously, this is why all the contests and giveaways on fb are links to blogs where you have to leave a comment or join an email list.

So here's the rules:

1. You must "like" my page. If you are reading this, you probably already have.
2. Leave a comment on this post. I don't really care what you comment, but, keep it semi-clean, please. You aren't getting bonus points for creativity or sucking up. However, sucking up is always appreciated.
3. The deadline to comment is 5/21/12. Randomly, one comment will be chosen and that person will get a small, unframed work on paper. If, at the drawing date, I have 200 "likes", there will be a second winner. That gives you two weeks to come up with a witty comment and, if you choose, get all your friends, family members, old schoolmates, and co-workers-who-you-really-don't-like-but-felt-obligated-to-accept-their-friend-request on board. The winner(s) will be announce the next day.

What are your odds? Well, technically, right now, they are 1:149 (because I'm not counting myself), although I'm pretty sure they are better than that, based on the regular interaction I get on the page. And if I hit 200, then it will be 1:99.5, and again in reality better than that. So if you invite your friends to the party, your chances of winning actually go up. Good karma for you, too!

Will it be a drawing or a painting? I don't know, I haven't made it yet. Does it matter? It will be awesome!